“Hidden mother” portraits are fascinating reminders of how the technology of photography has changed. Tintype images required sitters to hold their pose for extended time, something that could not easily be demanded of an infant. Photographers and their assistants, sometimes the child’s mother, and other times the photographer’s wife, would crouch behind the child’s seat, reaching around to steady the pose. In the example below of Arabella’s daughter, Claribel Miller (left,) is that Arabella herself underneath the cover? Other times, as in the portrait of Alice Chapman (center) the “mother’s” presence is no secret — here we see her hands, as well as the bow on her head. Finally, the portrait of Arabella’s daughter, Harriet Alfarata Miller (right) is taken with a late 19th century technology by which a faster shot could be taken. No more need for a mother’s hands, though likely she was present and coaxing the baby to pose.

Scholars have remarked upon the metaphorical quality of the “hidden mother” images, suggesting how they convey a broader sense in which Victorian era mothers were present, but often unseen and uncredited for their labor. For African American mothers, this idea is especially poignant. Just one generation removed from the era of slavery, black women still fought to claim the status and the authority over their children. This casts Arabella Chapman’s albums in special light. To document and preserve the images of her family was, for women like Arabella, a political act. African Americans, in this view, became more than workers or subjects of derision. They were makers and caretakers of their own families. And while her mother may have been “hidden” in deference to photographic conventions, the images in these albums suggest how Claribel and the other children of the Chapman and Miller families were at the core of a collective identity and esteem. 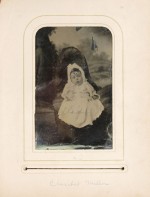 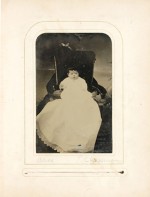 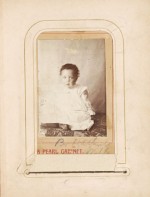 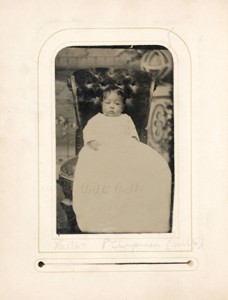